I often see arbitrary patterns used for versioning packages and assemblies, especially for internal projects, with the only common goal being that the versions are increased with each release. There is rarely a distinction between NuGet package Version, AssemblyVersion, FileVersion and InformationalVersion and they’re commonly all set to the same value, if set at all. That’s not to blame anyone, having all these different ways to set a version is darn confusing.

However, if you plan to release a public NuGet package, or an internal package that could be heavily used, you’ll be making your life, and your users’ lives a lot easier, and avoid creating a “dependency hell”, if you distinguish between the above versions and follow a meaningful versioning strategy like Semantic Versioning.

If you haven’t heard about Semantic Versioning, here’s the TL;DR:

So how do you follow and apply that in the .NET ecosystem?

I’ve recently released a NuGet package, called EF.Auditor – a simple and lightweight auditing library for Entity Framework Core that supports Domain Driven Design. As part of releasing this package, I refreshed my knowledge around versioning, the multitude of version attributes and researched versioning strategies used by Microsoft and popular packages to arrive at the sweet spot of versioning packages and assemblies. I’ll go through the highlights below. If you’d like to skip the details and just see the versioning strategy, jump to the “Putting it all together” part.

If you’re confused by all the different versions, you’re not alone. However, while they might all look the same, they have quite different characteristics and effects.

This is the version in your package’s nuspec file in the <version> element.

Since this version is the most visible version to developers, it’s a good idea to update it using Semantic Versioning. SemVer indicates the significance of changes between release and helps developers make an informed decision when choosing what version to use. For example, going from 1.0 to 2.0 indicates that there are potentially breaking changes.

Commonly defined in the csproj file, or AssemblyInfo.cs in old project formats, the assembly version is what the CLR uses at runtime to select which version of an assembly to load.

The .NET Framework CLR demands an exact match to load a strong named assembly. For example, Libary1, Version=1.0.0.0 was compiled with a reference to Newtonsoft.Json, Version=11.0.0.0. The .NET Framework will only load that exact version 11.0.0.0. To load a different version at runtime, a binding redirect must be added to the .NET application’s config file.

Strong naming combined with assembly version enables strict assembly version loading. While strong naming a library has a number of benefits, it often results in runtime exceptions that an assembly can’t be found and requires binding redirects to be fixed. .NET Core assembly loading has been relaxed, and the .NET Core CLR will automatically load assemblies at runtime with a higher version, but the .NET Framework CLR needs the entire AssemblyVersion has to be an exact match in order for an assembly to be loaded.

For maximum binary compatibility with the .NET Framework CLR and strong-naming scenarios, only sync the major version of this attribute to match the major part of your semantic version and leave the other parts as 0. This is the strategy followed by .NET Framework BCL, CoreFX and many other popular packages like Entity Framework Core and Newtonsoft.Json.

Providing a * in place of the numbers is likely one of the worst things to do as it makes compiler set numbers based on some crazy rules and you’d need a calculator to get any valuable information out of those numbers. It also would cause an error in .NET Core projects as they are deterministic by default.

Note that although Assembly Version follows a similar {Major}.{Minor}.{BuildNumber}.{Revision} schema, it has significant limitations so you won’t be able to apply SemVer here anyway:

Commonly defined in the csproj file, or AssemblyInfo.cs in old project formats, the assembly file version is used to display a file version in Windows and has no effect on runtime behavior. Setting this version is optional. It’s visible in the File Properties dialog in Windows Explorer: 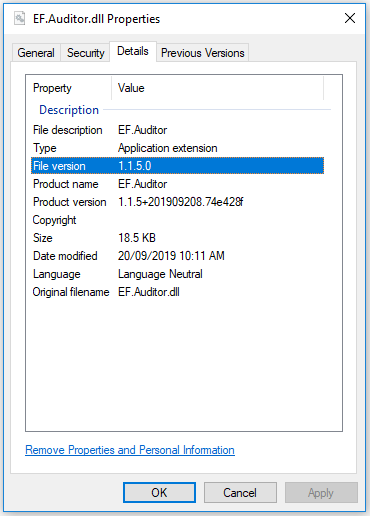 It’s also the version displayed in the Windows Explorer tooltip when you hover over an assembly:

File Version follows the same versioning schema as Assembly Version and has the same limitations, so you can’t use this one for proper SemVer versioning either. But for consistency and preventing user confusion, I recommend keeping the {Major}.{Minor}.{BuildNumber} parts of this attribute in sync with the {major}.{minor}.{patch} from your semantic version. Changing this attribute frequently won’t create the same issues as changing Assembly Version explained above, as this attribute is never used by .NET.

Commonly defined in the csproj file, or AssemblyInfo.cs in old project formats, the assembly informational version is similar to File Version in that setting it is optional, it has no effect on runtime behavior and it shows up in File Properties dialog in Windows Explorer as Product version: 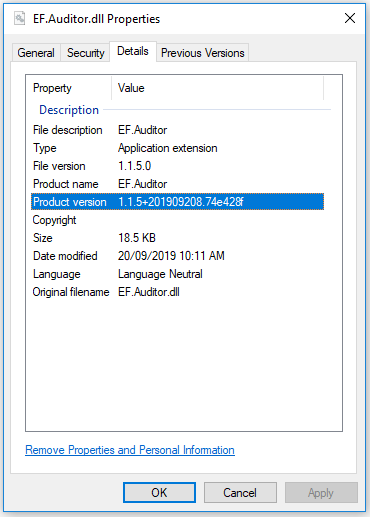 The major difference is this version can be any string and doesn’t have the same limitations as Assembly Version and File Version, which makes it perfect for being set to your full SemVer 2.0.0 version.

The InformationalVersion assembly attribute could be read at runtime and used to identify the exact version of your package or application, for example in logging:

Putting it all together

Combining the above information and after trying many different approaches through the years, I’ve found the below strategy to be at the sweet spot of versioning NuGet packages and .NET assemblies:

How you implement the strategy would depend on your platform, tooling and build process. While you could go with tools like GitVersion, my preferred method these days is a simple source-controlled way of managing the version through Azure YAML Pipelines, close to where the rest of my build definition is.

I’ve simplified the pipeline to the bits relevant to versioning; you can see the full pipeline definition on GitHub.

Being a consultant exposes me to a wide variety of challenges, both technical and non-technical, and results in diverse and invaluable learning. This blog's main purpose is to serve as a self-reminder of some of those learnings that I've found the time to write down, but if it happens to help you too, that's even better!